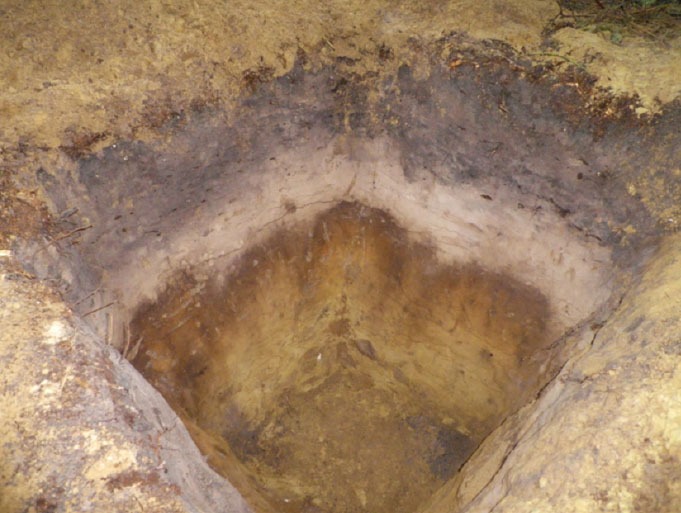 Essential role in the soil due to its layered structure based on silica, alumina and possibly magnesium. 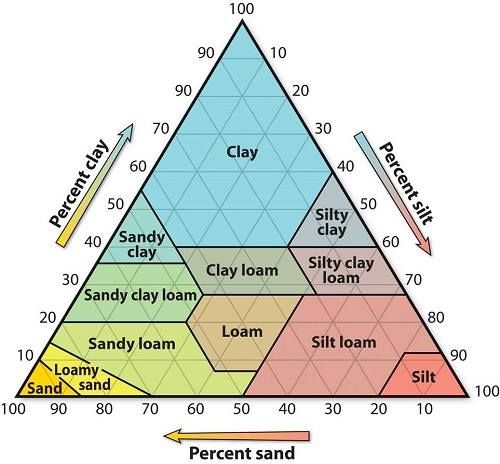 Sandy elements without any connection: the soil is filtering.

Sandy elements embedded in clay. Impermeable to air and water: the ground is asphyxiating. 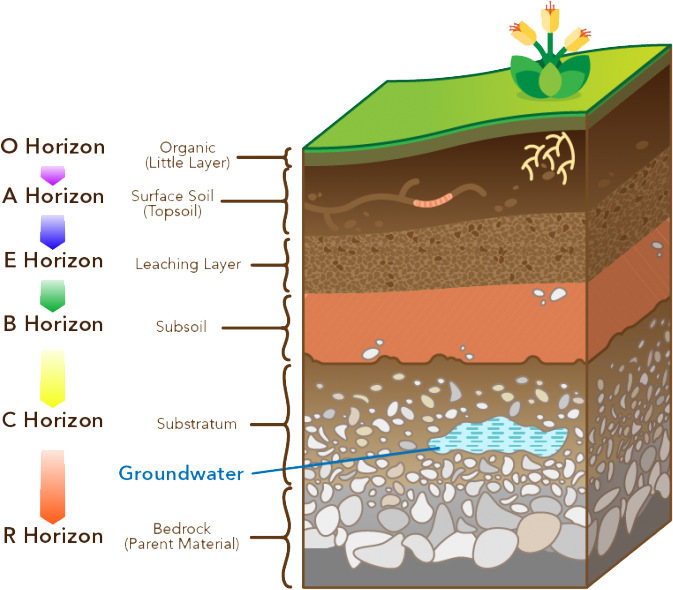 The O (organic) horizon is mainly composed of organic matter such as decomposing plant and animal debris and humus. This horizon is rich in nutrients since the decomposers degrade the debris. These nutrients are carried to the lower horizons by rainwater. Depending on the soil, the O horizon can be very thick or non-existent.

The A horizon or humus horizon (arable soil) is mainly made up of minerals and humus. Its color is generally dark. As it is rich in organic matter, this layer is very important for the growth of plants since it is very fertile. It is in this layer that most plant roots grow. It is aerated by burrowing animals. It is highly subject to erosion.

The E horizon is also called the eluvial or leached horizon. Drained by water infiltration, the clay, minerals and organic matter making up this layer escape and make it poor in these elements. Sand and quartz particles from the silt remain. Its iron depletion often gives it a lighter color than neighboring horizons (sometimes almost white). It is often found in older soils and those in forests.

The B horizon or accumulation horizon (subsoil) consists of clay and mineral deposits as well as organic matter. This layer is very poor in humus, but very rich in mineral elements such as iron oxides and silicates. It is often paler in color than the A horizon or even reddish in color. Debris from the upper horizons accumulate there.

The C horizon or alteration horizon (layer of parent material) is made up of bedrock altered and fragmented by physical and chemical factors and very little organic matter. It is from it that the soil develops. No roots grow in this layer. It can be sandy, clayey or hard.

The R horizon (or bedrock) is made up of a mass of rocks such as granite, limestone or sandstone.

A quasi-inert rock preexists. Under the action of the climate and various organisms such as microbial life and fungi, it cracks and deteriorates to give rise to the soil. This process gives rise to the C horizon.

Favoring the establishment of life, the accumulation of organic waste leads to the formation of topsoil and gives rise to the fertile upper layer where cultivation becomes possible.

As the soil deepens, new horizons (B) form between the weathering horizon (C) and the humus horizon (A).

Humus is formed through chemical (oxidation), physical (desiccation) and biological (microbial synthesis from lignin and cellulose residues) processes. This humus, called stable humus, is mineralized in turn at a rate of 1 to 2% per year to form mineralized secondary humus. Complex molecules are therefore reduced to simpler molecules and ions. These are found in the soil solution and are therefore assimilated by plants, leached or absorbed by the clay-humus complex as a reserve. 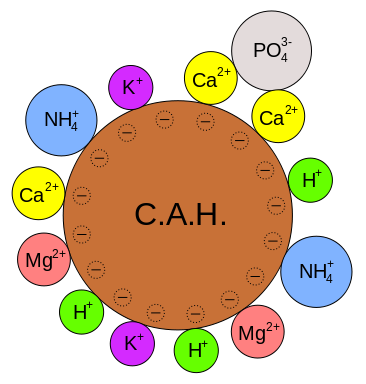 The CAH is essential in the structuring of the soil.

Humus is obtained by transformation of organic matter by soil fauna. The molecules of humus and the sheets of clay combine by binding, thanks to positive ions; cations (calcium, magnesium, iron, etc.), thus forming this solid and organized clay-humus complex (see diagram below).

It protects the clay, allows the cohesion of the soil, the storage of water and minerals and a good resistance to compaction. To create humus in poor soil, you need to add a lot of organic matter (compost, manure, plant debris, etc.).

Clay and humus carry negative electrical charges and therefore attract positively charged cations1 such as Fe²+, Ca²+, H+, Mg²+, etc. The ions2 with 2 positive charges make it possible to bind the clay and the humus together in order to create the clay-humic complex via ionic bonds.

1 An ion is an atom or molecule that carries an electrical charge, because its number of electrons is different from its number of protons. There are two main categories of ions: cations, positively charged, and anions, negatively charged.

2. A cation is an ion which, having lost one or more electrons, carries one or more positive electric charges